NSF awards $13 million for research on how humans, environment interact

My new research project in Bangladesh, with Kimberly Rogers, Amanda Carrico, Katharine Donato, and Carol Wilson, was featured in the National Science Foundation's announcement of this year's grants for research on coupled human-natural systems. 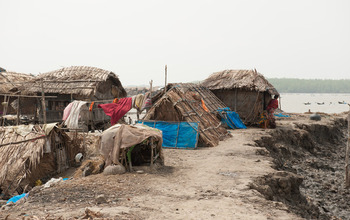 NSF awards $13 million for research on how humans, environment interact

Delta: A place where sediment carried downstream by a river enters the sea, forming a fan of sand or mud.

Although deltas make up just 1 percent of the world's land, they're home to more than half a billion people – and to fertile ecosystems such as mangroves and marshes. Deltas also serve as economic hotspots. They support much of the world's fisheries and forest products, and are major food production areas for many nations.

Scientists have found that deltas are disappearing at an increasing rate, however, affecting humans and other species, according to scientist Kimberly Rogers of the University of Colorado-Boulder.

Rogers is one of nine recipients of grants made in 2017 by the National Science Foundation's (NSF) Dynamics of Coupled Natural and Human Systems (CNH) program, which supports research that examines the complex interactions between human and natural systems. Total funding for 2017 CNH grants is $13 million.

Rogers will study socioecological system dynamics related to livelihoods, human migration and landscape evolution in the Ganges-Brahmaputra-Meghna Delta, which drains land in such locations as Bangladesh, Bhutan, India and Nepal. The results will help researchers and policymakers understand deltas worldwide, including the Mississippi Delta in the U.S.

“People are part of our planet,” said Richard Yuretich, CNH program director for GEO. “The CNH program explores our relationship with the world around us so we can live comfortably and minimize the adverse consequences of our actions.”

CNH considers humans and the environment as one interconnected system. This year's grantees will look at ways in which people deal with environmental processes in a range of settings, including coasts, woodlands and cities.

“The complex interplay between our activities and the natural environment has major impacts on human well-being and on environmental quality,” said Tom Baerwald, CNH program director for SBE. “A deeper understanding of these dynamics is critical to improving human welfare and preserving natural systems.”

The 2017 CNH research subjects include: feedback among coral reef fishing practices, livelihood strategies, and the shifting dominance of corals and algae; dynamics of interactions among humans, bats and pathogens; water supplies, land use and disadvantaged communities; links between short-lived local pollutants and long-lived global greenhouse gases; and traditional livelihoods and ecosystem dynamics in Utah's pinyon-juniper woodlands.

Liz Blood, CNH program director for BIO, summed it up: “These awards demonstrate the importance of understanding the connectedness of nature and society in studying the effects of environmental change and socioeconomic stress. The results are critically important to all of us.”